If you are looking to see Golden Temple Images then you come in right place. Harmandir Sahib also known as Golden Temple is a holy place of Sikhs. It was built by the fifth Sikh Guru Arjan Dev between 1588 to 1604. Due to an attack of Afgan in the 18th century, some part of the temple damaged that resettled in 1764.  Earlier in the 19th century Maharaja Ranjit Sing decorated the temple by gold and since then the temple is known as Golden Temple.  A beautiful lake surrounds the temple.

There is four entry spot you can enter the temple; that welcomed everyone from every place.

Golden temple is one of the holiest sites for Sikh where the worship of GOD. 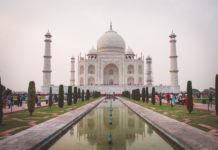 10 Best Places to Visit in Sylhet

Top 10 Things to Do in Phuket

Top 10 Things to do in London with Kids